Every year, our college organises the Heller Farkas Professional Week, which over the years has become one of the most prestigeous events of the Corvinus University of Budapest that is organised by students (but naturally open to the public). 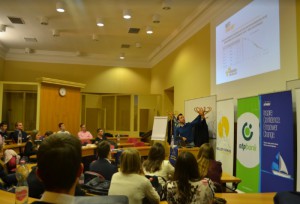 In the autumn of 2016, our College organised again the Heller Farkas Professional Week, where this time, we examine financial and stock market innovations, and the importance of the fintech movement, under the keyword, future of finances. We asked Richárd Végh, CEO of the Budapest Stock Market, to hold the opening lecture of the event, who has accepted our invitation.

In the past years, there were revolutionary changes in various industry branches because of the low entry- and enterprise costs caused by the digital revolution. The best examples for this are probably the effect of Airbnb on the hotel industry, and the fight of Uber against taxi companies. The time has come now for the renewal of financial systems. The goal of financial technology (short: fintech) is the redefinition, and maybe shaking of traditional and institutionalised financial solutions. The mentioned movement spreads mainly in the form of startups. These companies mainly develop softwares and technologies that make the recommendation of effective, lowcost, and in many cases personalised services available for customers. Because these companies focus mainly on niche markets, they are way less regulated, and in some instances, lawmakers have not even prepared for the regulation of the new services.

But how does the movement effect actors of the traditional banking sector? The mainly inherited, many times outdated systems of banks can’t keep up with the new players coming from the technological sector. The problem is, that finance experts are – in the most cases – not technological experts. So, how can banks compete with fintech companies? Does it make sense to compete instead of cooperating? And, what is the situation of Hungary in this regard? In short, what will happen with the future of finances in the near future?

We are looking for an answer for these and many other questions in our autumn conference.

The program of the professional week: